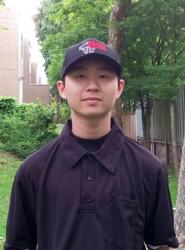 Jason Zhou is an up-and-coming young umpire from Richmond, BC. A student by day, Jason enjoys every opportunity he gets to umpire - whether it be mentoring a younger umpire, or working with senior umpires at the Bantam AAA level. Most recently, he worked BC Minor's John Main 13U AA tournament, a prominent tournament in Vancouver. His strong performance and desire to learn caught the attention of the tournament supervisors, and he was rewarded with a semi-final plate assignment. In addition, he was identified as a candidate to attend BC's Umpire Academy next spring - a four day camp for some of the top umpire prospects in the province. In addition to umpiring, Jason is a former high-level player for U16 Team BC, and is currently an assistant coach with an 11U baseball team. It's safe to say he loves baseball!